January 7th marked the 6 month anniversary of the publication of my debut novel Wolf’s Head, which is my take on the Robin Hood legend. 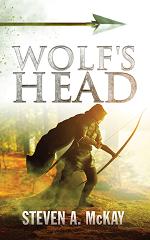 It’s been an interesting journey, full of ups and downs. Well, to be honest, mostly ups, apart from the odd hurtful review (which do get easier to take as time goes by, so take heart brand-new authors)!

Highlights of the first six months? Two things stand out:

1) 4.3 average star ratings on both the UK and USA Amazon sites, with a combined total of 179 reviews. That’s an enormous number of reviews for a debut novel by a complete unknown, and the fact so many people have really enjoyed the book and wanted to share their experience is so inspiring for me. I’m sure every writer, musician, or artist of any kind wants their work to be appreciated. There’s nothing better than waking up in the morning to a new 5-star review where the reader says your version of Robin Hood is the best they’ve ever read.

2) Sales of the book (particularly the ebook) have really exceeded my expectations too. As I type this, I’m probably a week away from hitting 11,000 sales. That’s sales – none of those were freebies, and almost all of them were at the full price of around £2.25 or $3.50.

I wasn’t sure whether to tell people about the sales figures in this post. To be honest, it feels a little like I’m showing off and it might even rub some people up the wrong way. I hope not, as that’s not my intent and it’s really not my style at all.

However, I feel I should let the world know how well the book’s doing because if I don’t no one will. And, let’s be honest, like every author out there, I’d love an agent to take me on. I’ve shown self-publishing works, but it would be great to see Wolf’s Head translated into other languages, maybe sell film rights, have an audio book made up etc. Maybe if agents and publishers know how well the book’s sold they’ll get in touch? Who knows.

As I head into 2014 I’m hopeful that I’ve got a very powerful piece of short-term marketing in the pipeline, and perhaps one other really big thing in the works. If either of those come to fruition you can be sure I’ll post it on here and on Facebook, so keep an eye out and please share with your social media mates.

Going forward, other authors have told me the best way to market your books is to write more books, and to that end the sequel to Wolf’s Head is pretty much ready to go. The Wolf and the Raven has been completed and now enters the editing and proofing stage so please, watch out for it within the next month or two. I originally planned the series to be a trilogy, but The Wolf and the Raven took on a life of its own and I’m wondering now if I can come up with FOUR books without stringing things out. We’ll see…

Thank you, so much, to everyone who’s bought the book, shared posts about it on Facebook or Twitter, sent emails and messages telling me you loved the read, and an extra big thank you to everyone who’s posted a nice review on Amazon or Goodreads, it really does help sales.

I have to get off to bed now, it’s past midnight, I’m shattered after watching panto with the family today (they enjoyed it, but I was bored – there wasn’t a single guitar solo in it!), and I have the day-job in the morning – working on gas meters around the nethermost regions of Glasgow, no doubt in the pissing rain, while dreaming of being a full-time writer..!

Thank you again for the past six months, readers! 🙂

7 thoughts on “My first six months as an indie writer”