I just bought the new Slayer album. Everyone knows I’m a huge metal fan – I never stop talking about it. I even mentioned the death metal band Nile in my novella Knight of the Cross. I listen to black metal when I’m writing my books because it helps me concentrate.

Slayer have been one of my favourite bands for about 25 years. But…I really don’t like their new video for the song “Repentless”. Don’t get me wrong, I LOVE the song – it harks back to their Golden Age around the time of the South of Heaven album in the late 80’s in my opinion. But the video…well, watch it for yourself.

A guy getting his throat cut. Another with an assailant’s fingers in his eye-sockets. A beheading.

And at the end of it, we’re left saying, WTF? What was that all about? There’s no point to it, no story, no hidden meaning to explore (as far as I can tell anyway). It’s just senseless, very graphic violence.

But…my little rant here might be surprising to anyone that’s read my books. Quite a few reviewers have commented favourably on my ability to write a good fight scene. “Brutal, bloody, brilliant!” was how one guy described my latest novel, Rise of the Wolf. Indeed, I don’t shy away from describing someone having a finger lopped off, or a sword in the face and I never will. Violence is a fact of life and it plays a big part in my books. 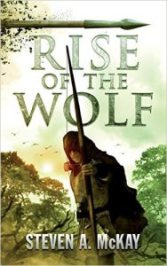 So why do I find this Slayer video so distasteful?

I think writing is a VERY different medium to film, ultimately. In a book, an author can describe a scene – any scene, not just a violent one – but the reader has the choice whether to really READ it or just skim over it. In film you don’t have that option. You can turn away from the screen, sure, but then you miss whatever’s happening and a chunk of the scene is gone. Film leaves nothing to the imagination.

In a book, if you skim over a section, you can still paint the picture of what’s happening in your head. You don’t lose the place, you just come up with your own idea of what’s going down, don’t you? In other words, almost every scene is open to interpretation.

I never thought about this until tonight when I watched the “Repentless” video. A novel is a much more immersive experience for someone because much of it is down to the reader’s own imagination. Nothing is on a plate for you – you have to conjure the images for yourself, no matter how descriptive the author’s writing is. Film, on the other hand, is utterly graphic and unforgiving. You WILL see what the director wants you to see, whether you like it or not. There’s no filter; you can’t skim over that guy having his throat cut.

I think that’s why books are so amazing. The best ones don’t just TELL you what’s happening, they work WITH you to create a world that’s yours as much as it is the author’s but they also allow you to avoid things you don’t really want to see. Or is that just me?

I’d love to hear your thoughts on this subject, but please, DO buy the new Slayer album, whether you like the video or not – it’s a fantastic record and well worth your cash!