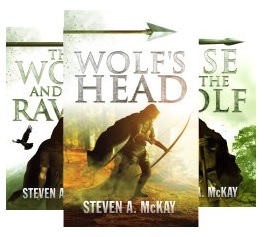 All three of my Forest Lord books are part of today’s UK Amazon Kindle DAILY DEAL. Each book is at a special hugely reduced price for today ONLY. Get the full set of three for just £2.97 or one each for 99p.

If you haven’t read them yet, or simply need to complete your collection today is the day to do it!

Go HERE to find out more.

And, as a bonus, here’s an extract from the fourth and final Forest Lord book (as yet untitled).

This follows two brand new characters (well, sort of…) as they meet a couple of genuinely unsavoury outlaws who played a small part in Rise of the Wolf…It was literally written tonight so un-edited. Enjoy!

The cry was high-pitched but filled with aggression.

With the promise of violence.

Philip stopped dead in his tracks, eyes scanning the foliage all around them.

“Who said that?” Eoin rumbled. “Show yourself.”

A small man stepped out from behind the massive trunk of an old yew tree, longsword in hand. He had an unkempt beard, dark eyes, and appeared to be utterly filthy. And yet, when he grimaced at them, Philip was surprised by the fellow’s full set of almost white teeth.

“You two look like you can handle yourself,” the small man noted. “So I won’t get any closer.” He laughed unpleasantly. “Take my word for it though, if you don’t do as I say my mates will fill you with arrows so quick you’ll die looking like a pair of giant fucking hedgehogs. Drop your weapons and throw your purses over here. Quick now. Those hares strung around your neck too.”

Eoin glanced down at Philip, who simply nodded and slipped his coin-purse – which was as good as empty – from his belt and tossed it onto the ground in front of the robber. Eoin followed suit, although his purse really was empty, and so light it flopped sadly to the ground only a short distance away from him.

“Oh for fuck sake,” the little robber spat in disgust. “Is that it? You two were hardly worth it.” He held up a hand and, with an air of bored resignation, spoke to the trees.

“Kill the big bastard first. I’ll deal with the other one myself.”

Philip dropped instantly, and swung his leg around, tripping Eoin just as an arrow tore through the air where they’d been standing.

He pushed himself back up onto one knee and drew his dagger.

“Get that little bastard,” he growled.

The thief brought his sword back, ready to charge, but Philip swept up a short, stout branch from the forest floor and threw it at his face. The man parried it just in time but the manoeuvre left him off balance, and the huge weight of Eoin barrelled viciously into him. They fell onto the ground with a thud that Philip imagined he could feel as well as hear.

He turned and addressed the trees and bushes all around them, a grin splitting his face as if this was a great game.

“You out there – you can shoot us, but my big friend there will snap your leader’s neck before he dies. Or, you can come out and we can talk.”

Eoin wasn’t just holding the downed robber; outraged at the attack, his hands were squeezing inexorably on the man’s throat.

A man no older than thirty, longbow in hand but with – in stark contrast to his downed friend, no front teeth at all – slipped out from his hiding place to their rear. “Leave him be, let him up. We didn’t plan on killing you –”

“Just on taking all our money and leaving us as good as dead in the middle of the forest?” Philip finished the man’s sentence sarcastically. “Well, as you can see…” he retrieved the coin-purses he and Eoin had dropped and emptied them into his hand. “We haven’t got any fucking money. Did have, but we left it behind in Holmfirth when the law chased us out.”

Eoin had let the small robber up by now and they stood glaring at one another now: the giant and the purple-faced, breathless thief.

Philip gazed across at the little man, sizing him up, and came to the conclusion he’d rather go toe-to-toe with Eoin.

The dark-eyed robber had a maniacal gleam in his eye that was deeply disturbing. They’d need to be careful around this one although…if they could get him on their side…

“Come,” he smiled, walking forward and grasping the robber’s hand. “We’re all outlaws together aren’t we? You must be as hungry as we are.”

He reached up and pulled the hares on the string around his shoulders over his head with a grin. “Let’s eat.”