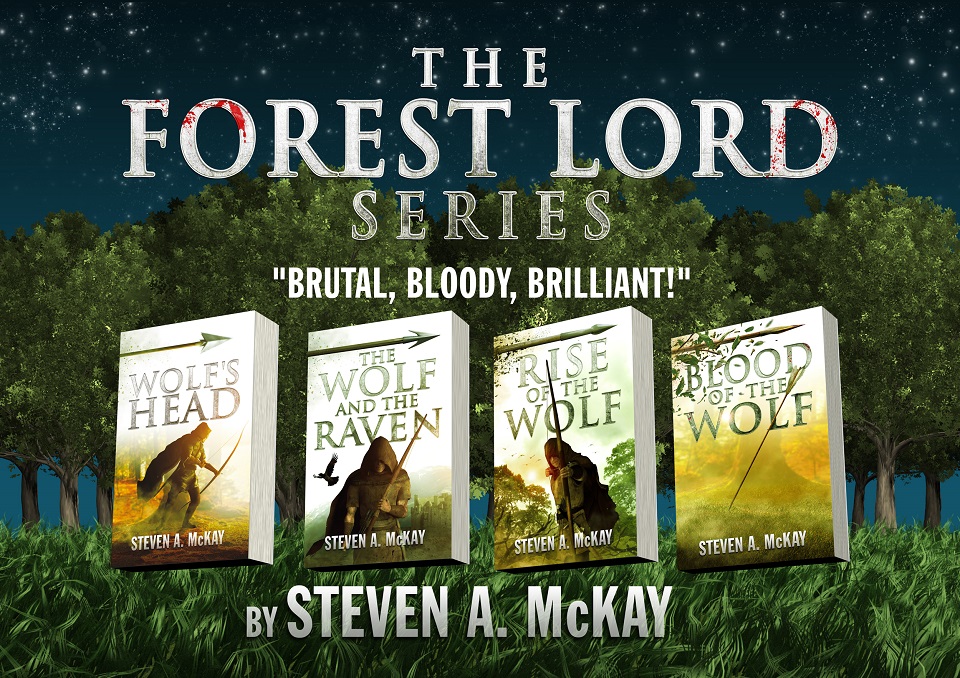 As you’ll know if you’ve read my Forest Lord series it was orginally planned to be a trilogy but ended up as four full-length novels. I’d read things like Bernard Cornwell’s Saxon Stories and felt like they’d have been better as a shorter series. Similarly, the first three Shannara novels by Terry Brooks were great slabs of fantasy but main characters died, time moved on and, as a reader, I felt like he never hit the same heights as those original tales had.

Please don’t get me wrong – I’m not saying either of those series are bad. I still love them both! But I personally feel they’d have been even MORE classic if they’d been concentrated into fewer books. Cornwell’s King Arthur trilogy, for example, was, in my opinion, the perfect length. Tight, exciting, no padding, just great tales with great characters. Powerful stuff! Actually, those three novels were what inspired me to write myself.

Three books in the Arthur series versus ten books (so far) in the Uhtred series? And how many books were in The Lord of the Rings again…?

I can see the attraction in extra books – more for readers to enjoy from the same characters, more sales for the publishers, and more scope for the author to explore that universe.

On the downside, there’s the chance things will become padded out, watered down, and lose the power and punch of a shorter series.

So that’s why I ended my Forest Lord series when I did. It wasn’t because I was bored of the characters – far from it! I loved writing about guys like Little John and Tuck and sour-faced Stephen the Hospitaller sergeant-at-arms. But I didn’t want them to outstay their welcome.

And, finally, I come to my point.

Once again, I’m starting a new series of novels and it’s planned to be a trilogy. BUT, as I’m nearing the end of book 1 I’m coming to realise this might end up running to a few extra books as well. The main character, Bellicus, is a lot of fun to write and there’s so much I can explore in his background, while the rest of the series is really opening up as I continue to research the period. Bellicus has just met Arthur and Merlin (minor characters in this tale) and the second main character (let me keep that a secret for now!) is just about to appear. And this is near the end of the book!

So I’d love to hear your opinion, either in the comments section here or via the “Contact” button at the top of the page, or on Facebook or Twitter or whatever:

Do you, as a reader, prefer a short or long series? Do you grow tired of the same old characters after a few books, or could you read about them for years and years (assuming they’re well written)? What’s your own favourite series of books and how many volumes are there? Could more or less books have made that series even better?

In short, would you prefer me to write a trilogy or half-a-dozen books in my new Druid chronicles?

To give you an idea of how the first book is coming along, here’s a short un-edited extract. It’s hard to find extracts that don’t give anything away so I hope you like it!

“We welcomed you into our village,” Carnucus spat, a dark rage completely filling his face and Bel wondered what tale he’d been spun. “But you’re a monster.”

That last was little more than a horrified whisper.

The druid said nothing, he simply stared at them, mace and iron bar gripped firmly, heavily muscled arms spread wide in a gesture of defiance and strength.

“Get him,” a voice muttered from the back of the group and Bellicus could see it was his adversary  from the night before, urging on the villagers who, for their part, looked terrified.

Yet the druid knew that placed him in a worse situation than if they were calm. If they were angry but unworried he might be able to reason with them, find out what they’d been told and convince them it was untrue. Here though, the men’s fears were building up like a river held back by a crumbling dam and, as a result, might explode into violence at any moment. He stood motionless – silent – but that seemed merely to unnerve the villagers even more.

The muttered voice came again but he couldn’t make out the words. Their intent was clear though, they were designed to instil even more dread in the hearts of the mob before they had a chance to back down.

“He’s only one man,” the voice finally shouted. “Get him now, before he murders any more of our people!”

Bellicus understood then what was happening, but before he could deny responsibility and lay blame where it was deserved, three of the villagers came at him, their nerves shredded.

He had no choice but to defend himself.

As the first man lunged at him with a long-bladed knife he brought down the iron bar, smashing wrist bones and dropping the man to his knees, screaming in pain. The two behind him struck at the same moment but this time Bel spun away and Eolas lunged forward, unbidden, snapping and snarling so the attackers jumped back in fright. It bought the druid a moment to lash out with his boot, lifting one of the men off the ground he kicked him so hard between the legs, and then he continued his forward motion, swinging the iron bar around and into the ribs of the final attacker.

Eolas slipped back into the shadows and Bel took up his stance from before, arms wide, face grim, his three opponents rolling in the ground before him as the low growling of his dogs laid an otherwordly, fearful mantle over the whole scene.

“I told you he was a killer,” came that hateful voice, and now the thief’s child joined in from the side of the stunned potters.

Carnucus glared at the man. “Kill him how exactly, Atto? You saw what he just did to three of our friends.”

“Rush him,” one of the other potters shouted, his face flushed red with battle fever and, again, the giant druid prepared to defend himself.

Battles were often thus. Those too fearful to fight were goaded into action by their leaders until, at last, someone’s nerve snapped and they charged, even when they knew it meant certain death.

Bellicus hadn’t killed any of them yet though…

Just click the red button to register for my email list and you’ll get “The Rescue” – a Forest Lord tale – completely FREE :

3 thoughts on “Question for readers – long or short, which do you like best?”