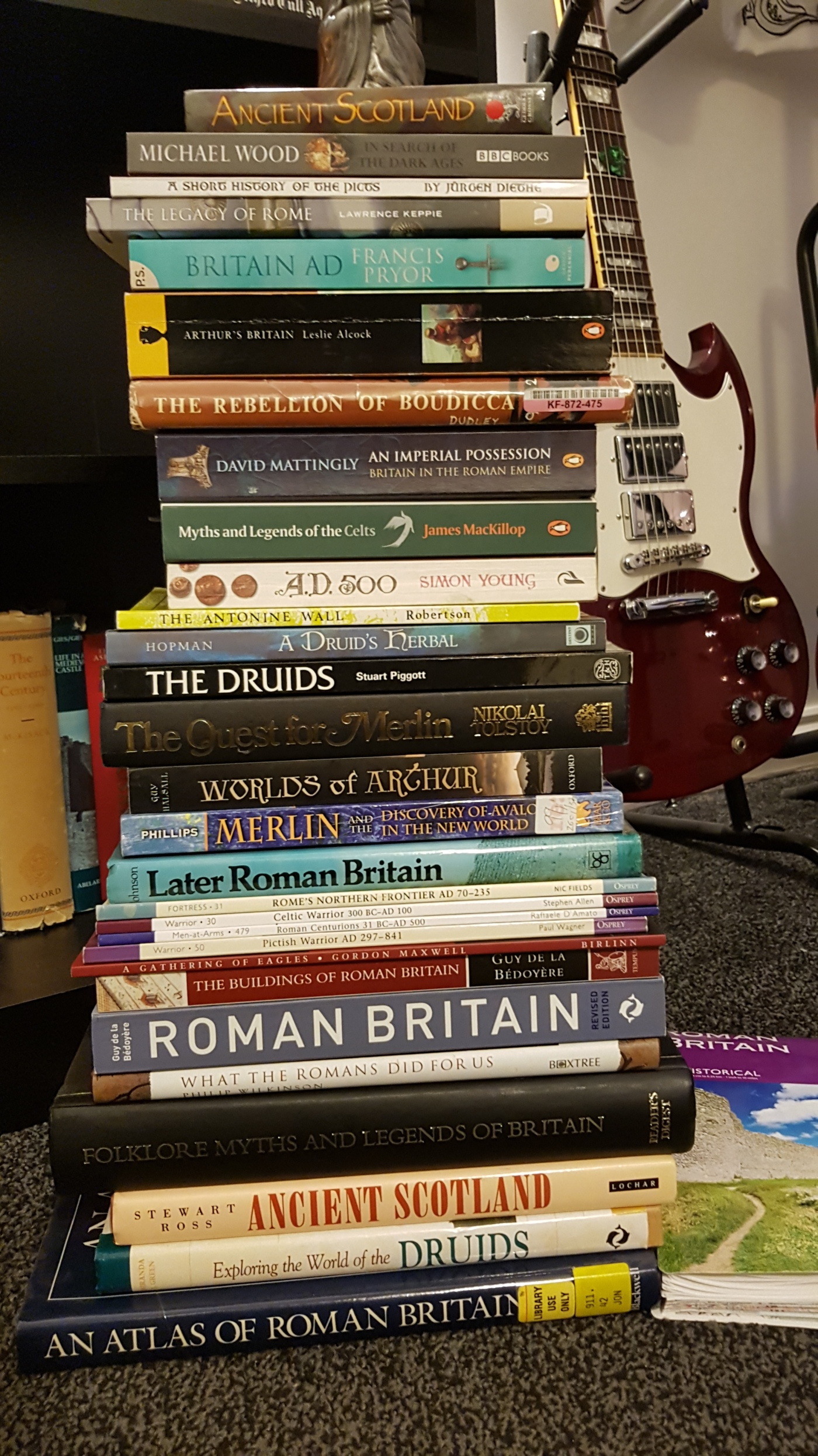 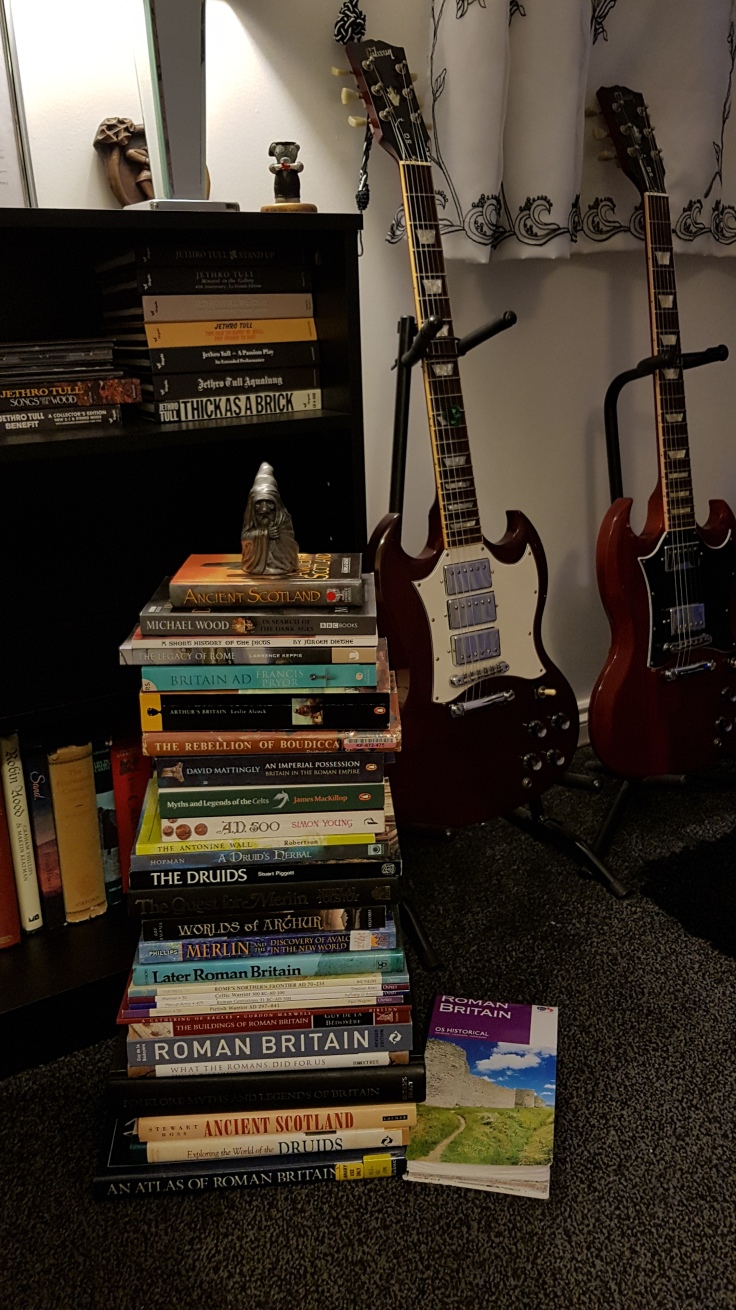 A LOT of work goes into a historical novel. Actually writing the thing is the easy part!
To begin with you have to do a lot of research before you even think about putting cursor to screen because, unless you’re already familiar with your chosen period, you really need to get a feel for it. How did the people live? What did they eat? How was their society structured? What was the land like in terms of roads and other infrastructure? What did they know about medicine or even recreational drugs? What gods did they believe in?

And then, of course, you need to continue with that research even when you’re almost finished writing the novel because you have to make sure all your facts are correct, and fill in any blanks that you weren’t sure about.

That’s where the internet, and a big pile of around 30 books comes in useful! I’m sure there’s even more lying around in my car and about the house but don’t get me wrong – I haven’t read every one of these cover-to-cover. Some of them I have, but others I was able to only skim through the sections relevant to my period (post-Roman Britain circa 430AD).

When I find something I think will come in handy, I underline it and often put a big asterisk in the margin, maybe also bend the page corner. Blasphemy, I know, but these are my tools, there to be USED, not revered, just like the guitars in the pics.

I’m still working my way through these, and my mother keeps bringing me more every so often, even though the first draft of The Druid is finished. It’s surprising how often a little note in a book, something apparently insignificant, can spark an entire plotline or character trait.

I just found another book on druidry that isn’t in these photos and I might do another post on the books that have helped shape my druid Bellicus’s spiritual outlook. Then again, I’ve also drawn from aspects of my own beliefs and it might not be such a good idea to share that, since religion is such a polarizing issue… What do you think? Would you be interested? Would it be better to leave it to the reader to form their own internal picture of Bellicus without me leading their hand?

Let me know your thoughts here in the comments, on Facebook/Twitter, or use the CONTACT button on this page!

Here’s a little extract from the book, hopefully you like it – I have to be careful not to give away too much…

The great hall was noisy and filled with smoke. The people’s laughter filled the air and, normally, Bellicus would have thoroughly enjoyed the night. He felt slightly jumpy though, given his last evening in such a feasting hall and its heartbreaking aftermath.

Every time someone came in through the big double doors his hand strayed to the sword at his side and even the hounds felt his anxiousness, their ears pricking up every time he tensed on his stool.

Eventually, after he’d finished his meal – cabbage and bread along with the chicken which had been turned to perfection by Caiside’s wife – the druid began to settle and fears of another Saxon attack began to leave him. The strong mead the headman had been providing him with played its part, of course, although, as always, Bel knew his limits and never allowed himself to exceed them unless it was part of some magical working.

The people were singing a bawdy song about Fionn, the legendary hero from across the sea in Ireland and Bel was resting on his elbows on the table – slumped in his half-drunken state – when, again, the front door opened and a figure slipped inside.

The druid watched the newcomer pass by his fellow villagers, waving greetings and grinning as his name was called out but there was something wrong. Bellicus could tell by the man’s demeanour. His smile was tight and forced while his eyes darted about the room almost as if he expected to find some enemy concealed in the gloom. He was also heading directly, purposefully, for Caiside at the head of the table.

The man glanced back once towards the door, warily, and Bellicus knew for certain that something was amiss.

“You have a visitor,” he growled, grasping the singing headman by the arm and hauling him down into the stool beside him.

“Huh? What?” Caiside, lost in the joy of the music and the mead tried to shrug off the druid’s hand, forgetting who had a hold of him, but Bel was much too powerful and the headman dropped onto the stool with a confused, angry expression on his moustached face.

“You have a visitor,” Bellicus repeated forcefully, glaring into the man’s watery green eyes and getting to his feet, Cai and Eolas instantly following suit, alert and ready for anything. “Attend to him. Now.”

He loosened his sword in its leather sheath and watched the man approach, hastily but respectfully, so focused on his headman that he failed to notice the enormous,  dark-robed figure that marked his passage through the hall.

“Eran,” the headman greeted the newcomer with an irritated frown. “What’s happening?”

“Nothing,” the man shook his head, noticing at last the towering druid who watched him intently.

A shepherd Bel thought, judging by the grass stains on his clothing and the face which was weather-beaten although still untouched by deeper lines.

“I just wanted to let you know about some news,” the man continued, turning back to his headman. “About some men I saw earlier today.”

One thought on “Writing historical fiction – My treasure trove of research books. Magic, folklore, religion, history, and an extract from The Druid!”