This is something I originally wrote for the “Queen Anne Boleyn” website a few years ago. Thought I’d repost it for anyone that missed it.

When I first decided I wanted to write a novel I knew it had to be historical. When I chose Robin Hood as my main character it obviously had to be set in medieval times. 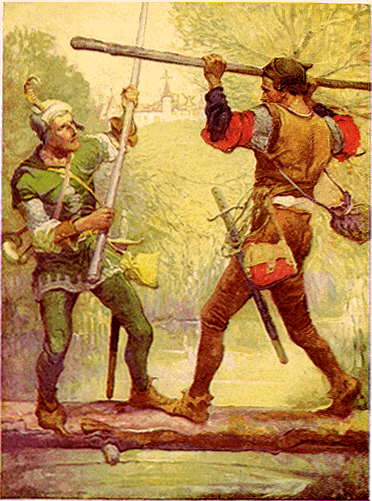 But there are two separate branches of historical novel writing: fiction, based on real events, with realistic human characters; and fantasy, where the basis of the story is set in a fixed, real historical setting, but with elements of magic or the paranormal woven into the tale.

In recent years, Bernard Cornwell has led the way in the histfic field, with books set in Saxon (The Pale Horseman) and medieval times (1356). We’ve also had excellent best-sellers from the ever-popular Roman period, like Douglas Jackson’s Hero of Rome and Anthony Riches’ Wounds of Honour.

In the historical fantasy field Glyn Iliffe’s superb King of Ithaca and its sequels feature gods and goddesses interacting with mortals like Odysseus and Agamemnon, but the books are written in a contemporary style, so, to me, they’re much closer to Cornwell than Tolkien.

I enjoy both types of historical writing, so when I started work on my own debut novel, Wolf’s Head, I didn’t think about which market to aim for – I just started writing.

People who’ve read Wolf’s Head might be interested to know that there was originally a mystical old “wise woman” in it, who would periodically appear to Robin and help him through difficult situations. I never made it explicitly clear whether she was real, a dream, or some other manifestation of Robin’s psyche. She just seemed like an interesting character (and a convenient plot device!).

I hired an editor to go over the finished manuscript though, and she didn’t like the wise-woman. It was suggested I either make the book much more fantasy-oriented, or do away with the character altogether.

I chose to say goodbye to her, and, in her place, I added almost twenty thousand words following real figures of the period, like the Earl of Lancaster and the rest of the unhappy English magnates who eventually rebelled against King Edward II. Consequently, Wolf’s Head became a much meatier piece of historical fiction, and lost its fantasy elements.

I believe the book is much better as a result.

That’s not to say there’s no place for fantasy within historical writing though. Earlier I mentioned Glyn Iliffe’s books – if you haven’t already, you should check them out, they’re great. Bernard Cornwell and Ben Kane have also included magicians and soothsayers in their novels, although Cornwell’s Merlin (from the Warlord Chronicles) is no Gandalf, and Ben’s haruspex Tarquinius no crystal-ball gazing Saruman, they do reflect the superstitions of the times the authors’ are writing about.

If you’re starting your own novel and wondering whether to go the fantasy route it’s a tempting path: your imagination can go wild if you include powerful monsters and magic, and it can be handy to make your protagonist psychic so they can miraculously escape otherwise impossible situations.

A word of caution though: some readers frown on too much fantasy. I recently read a novel set in Saxon times (by Tim Severin), which was, for the most part, quite realistic and well researched, but occasionally a ghost appeared to the main character. Although I enjoyed the book, I found the supernatural sections jarring and it took me out of the plot every time it happened, breaking my immersion in the tale. Judging from some of the comments I’ve read about the book on Goodreads I’m not the only one to feel like that. Stephen Lawhead’s King Arthur series seems to be looked down on in some circles too, thanks to the overtly mystical (and increasingly religious) elements, although I would highly recommend his Taliesin as a top class historical fantasy.

Ultimately, I’m very happy I decided to make Wolf’s Head as realistic and historically accurate as I could given the folkloric nature of the main character but there’ll always be room for magic when used properly and at the right time – not just in fiction, but in real life too…

I should add now, that I later wrote my own historical fantasy tale, Knight of the Cross, which was great fun and some readers think it’s better than my straight histfic! Check it out if you like the idea of HP Lovecraft-inspired medieval action and adventure.

When three heavily armed Hospitaller knights go missing from a sleepy village their Grand Master sends legendary hero Sir Richard-at-Lee and his sergeant-at-arms to discover their fate. Met with resistance from terrified locals, and whispered rumours of a blasphemous sect performing strange rites underground, Sir Richard finally realises he must defeat not only the cultists, but the faceless, unstoppable demon that haunts his dreams.

Fans of the Forest Lord series will enjoy this explosive spin-off novella that sees the much-loved English knight up against a foe that threatens his life, his sanity, and even God Himself. Dagon is coming…