“…enjoyed the fact that he showed how after the Romans left there were still remnants there, not just the houses falling down that you get in some books, but real people, with real knowledge and skill.” Nice double review of The Druid and Song of the Centurion here from Robin Carter at Parmenion Books – check out what he has to say! 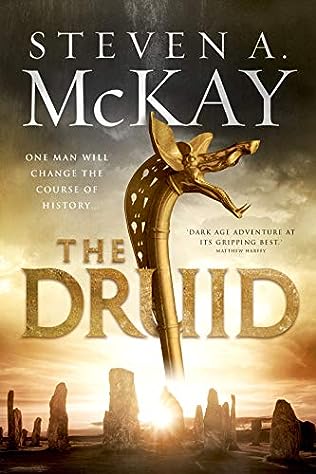 A land in turmoil. A village ablaze. A king’s daughter abducted.

In the aftermath of a surprise attack Dun Buic lies in smoking ruins and many innocent villagers are dead. As the survivors try to make sense of the night’s events the giant warrior-druid, Bellicus, is tasked with hunting down the raiders and thwarting their dark purpose.

With years of training in the old ways, two war-dogs at his side, and unsurpassed skill with a longsword, Bellicus’s quest will take him on a perilous journey through lands still struggling to cope with the departure of the Roman legions.

Meanwhile, amongst her brutal captors the little princess Catia finds an unlikely ally, but even he may not be able to avert the terrible fate King Hengist has in store for her.

This, the first volume in a stunning new series from the bestselling author of Wolf’s…